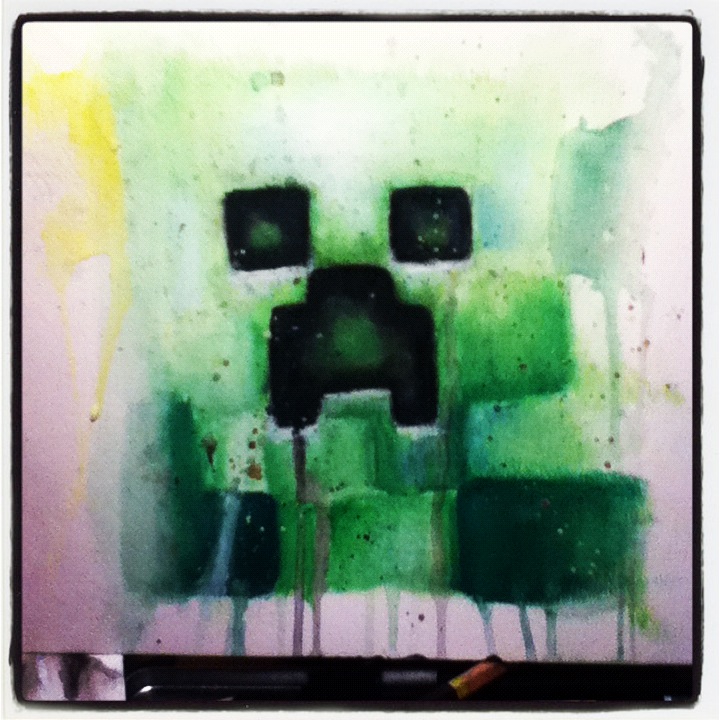 Description
These shambling humanoids are composed of vegetable matter and exhibit a basic level of sentience. They have no language, no culture, they are effectively a means for the species to propogate itself. Originally encountered within the Minecraft game these silent and explosive monsters are a threat to anyone who ventures into the dark places of the world. Creepers are roughly human sized and human shaped (understandably given their origin- see below) but they are comprised entirely of a mottled green-brown fungal substance. Their bodies lack definition and fine detail, with lumpy misshapen faces and hands like they have been badly formed by a lazy worker in clay. Amid the fungal masses that make up the body are black specks with short sharp cactus like spines emerging from them. These are the spores that are disseminated by the creature to propagate its species. In many ways the Spores are the monster – the Creeper is just the delivery mechanism.
They do not speak, they do not think, they have no society. They live like moss or slime or fungus in dark damp places and become active only when a humanoid being moves, or speaks within a couple of hundred feet of it. Then they stir and move and seek to draw near to them… And once near enough they explode and shower their targets with the Spores.

Attacks. None normal
Stealth Surprises a foe on a 1-4 on d6. If the foe is not surprised they are alerted to the Creeper’s presence by a soft hissing sound if it is within Close combat range.
Explosion Every round the Creeper is in close combat range with a human foe roll 1d6. On a roll equal to or less than the number of rounds they have been within close combat range they explode.
Everyone in close combat distance takes 2d6 damage and must make an immediate save versus poison or be infected with the flying spores (non-humans save at +2). The Creeper is killed by its own explosion of course.
Spore Infection If a character caught in a Creeper explosion fails its Save v Poison then spores from the creature have pierced the character’s skin and taken root there. Each day thereafter the character will lose 1 point each in Wisdom and Intelligence.
When either of these attributes drops below three the character will lapse into a stupor and over the course of the next 1d4 hours transform into a Creeper and will seek out the nearest humanoid target. If a character receives a Heal spell during the process of losing Intelligence and Wisdom the transformation is halted.
If an infected character is killed while infected (including by the original explosion of the Creeper) the transformation is hastened, and occurs the very next day.

Creepers tend to remain silent and relatively dormant until they sense a potential host for their spores. If they detect a human or other sentient humanoid creature they will start to wander until the target’s exact whereabouts is determnined at which point the Creeper will move directly and stealthily toward them, intending to explode and shower them in spores.
A Creeper cannot really tell the difference between humanoids but while anyone of any species can be damaged by a Creeper explosion, species other than humans save versus Spore Infection at +2 since the Spores have evolved with humans as their preferred medium for growth.

If you feel like taking a look at my first novel, a reality-jumping Cyberpunk Regency mystery with a kick-ass heroine then check out A Step Beyond Context available on Kindle for less than $3.00 and in paperback for less than $10.00.  It’s really good, honest, and gameable as hell.