I recently discovered Lamentations of the Flame Princess mainly due to seeing it mentioned all over the Internet as something worthy of note – people talked about its high production values, innovation, boundary pushing etc and I thought I’’d see what all the fuss was about. 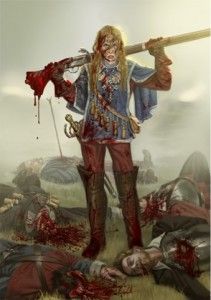 The basic rules are available for free online in an art-free version (which is a shame – the art is splendidly evocative of the feel intended by the author) and I will be honest and say that when I first read through the rules I was underwhelmed.   Yes it was an old school D&D clone, laid out very well, clearly explained and with some nice rule tweaks to tidy things up — but it didn’t seem to be anything special.   I was a bit nonplussed as to what all the fuss was about.     Then I saw a few reviews on YouTube – IvanMike and QuestingBeast do a lot of old school gaming posts and reviewed a number of LotFP’s products – and it dawned on me that the strength of the game isn’t from the system but from the adventures and supplementary material.   Articles I’ve read suggest that the author of LotFP really only published the rules as a vehicle for creating the sort of content he wanted to play.

Going back to the rules and giving them a fairer and more indepth reading with this in mind makes me appreciate them all the more.    The simple clarity of the game and the experience it will create is something that has piqued my interest.   Going back to a mindset of “Rulings not Rules” and rewarding clever play and exploration rather than focussing every adventure round combat scenes brings me joy.  I’ve never been a fan of combat for combat’s sake but many games have such detailed rules for combat that such scenes dominate gameplay, and often bring mechanical reward for fighting and overcoming foes rather than doing the rational thing and avoiding deadly encounters wherever possible.
I plan to run a home-made adventure for LotFP as soon as one of my groups gets a free space but I think I will need to impress on them a few changes of mindset before we do, in particular…

Player Characters don’t start off as heroes
They start as adventurers – people in a risky job out for gain and advancement.   If they think they can drop into the middle of an orc-nest and slay a dozen enemies using roundhouse kicks and pointy sticks then it will be a very short game.

It’s not the DM’s job to create a “Balanced Encounter”
I’ve seen this expressed as “Combat for Sport” versus “Combat as War” in articles online.    Modern D&D variants have elaborate and (to me anyway) impenetrable rules allowing DMs to set up encounters that are balanced finely against the abilities of the player characters, in short encounters that the PCs should be able to win if they roll well and play cleverly.   It’s almost seen as unfair if an encounter is “OP”.   However this is only unfair if the DM also forces the PCs into that combat with no alternatives.    Old school play suggests that when the PCs discover a big firebreathing lizard ten times the size of a man and with skin that drips venom that IT WOULD NOT BE A GOOD THING TO FIGHT IT.   Look for a way round.  Make deals with the Orc Tribe nearby to gang up on it.   Flood the cave by breaching the dam.   Go home.     In a more modern mindset the assumption would be “The DM will have built in a solution.”   Why?   Why would the Venom-Dragon’s cave automatically have a self destruct button.

When there’s a problem – Don’t look at the character sheet
“I search the room.. my Perception roll is…… 18, plus 2, 20!”
“You find a concealed panel in the flagstone floor – underneath it is a key”
Balls.
Tell the DM what you’re doing.   If you look for uneven spots in the floor or tap around listening for hollow sounding noises you’ll find the  panel.   If you want to convince the sceptical city guard tell the DM what you’re saying.   Charisma may help but the words count more.    If you think the wily merchant is trying to trick you then listen to what he’s saying, watch what he’s doing and decide that for yourself.
All these principles and many more are discussed more clearly and thoroughly in the Primer for Old School Gaming which is free to read and full of interesting ideas and which got me fired up to give things a go.
I’m looking forward to the challenge of running this way again –it’s been a long time – but I think it will bring a refreshing change of pace to things at least for a one-off.   The higher risk is something I’ll have to deal with in a way that won’t turn my players off but I’m sure I can come up with something.    And the default assumption and tone of LotFP that adventuring is a dark, dangerous and potentially horrific way of life suits my style of DMing anyway- most of my games bring at least a touch of horror here and there.
I’ll keep you all posted.